thank you very much

hello on a Ford Kuga TDCI 150 what is the address please?
Top

Just looked at mine now, does not look the same as suggested for 7E0-01-08, anyone got any suggestions what to change it to for the 180 map? Mine shows as follows:


All sorted, found the mode setting and changed that-all sorted now and much more driveable
Top

Hello,
I would like to make the change to 180CV on my mondeo 2021. My situation is this in the picture: 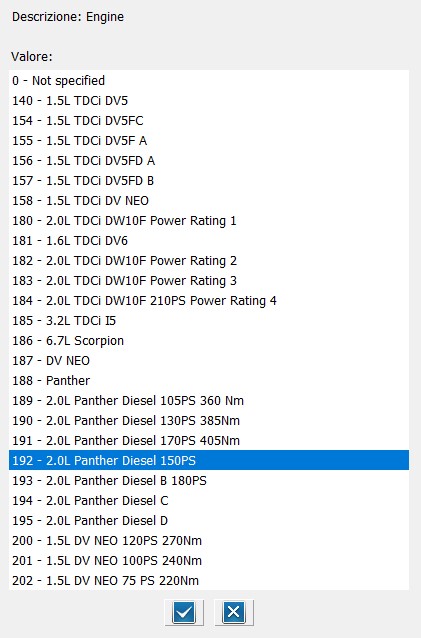 while in the ABS module I have this:

What should I change in your opinion?
Thanks a lot to those who can help me
Top

Even in the old versions there was already 190 hp, but the modification is always made with the 180 hp
Top

I still cannot believe it was as easy as setting the engine code to the higher one in the drop down menu! (Type 2 to type 3) From the other messages it looks like it's a new feature with people asking for codes for the "as built" coding.

I still cannot believe that oval blue were asking £800-900 extra on purchase of the car as you had to pay them for the higher engine power, when it was simply them just restricting the power.

This is going to sound odd, It may sound weird but people who've done it may understand what I'm saying. It's so smooth now at the 180 that you can tell it was restricted when it was at 150

Like I said, I hesitated. But I contacted the Ford Training Center for the Czech Republic. According to them, this is not ideal.

Return to “Configuration and Programming”